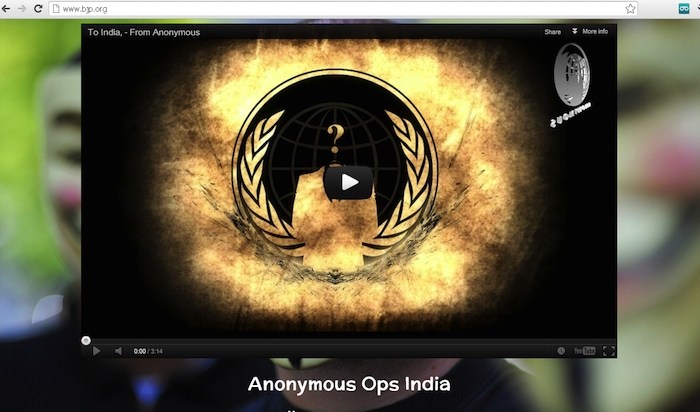 Few days back Anonymous Operation India (AnonOps India) had accused Reliance (RCOM) of blocking several sites without authorization, by going beyond the authorization given to it by courts and the governmental body.

Not only Reliance communication, other internet Service Providers in India are also blocking torrent sites, file sharing and some video sharing websites due to court orders and sometimes for their own benefit. Also Reliance Communication is among the first to block websites like Vimeoand in a official statement they said they will continue blocking Websites with or without court orders. Also some times back government had ordered to Block Twitter Id’s of anonymous group. following this court orders Twitter Blocked @OpIndia_back‘s then twitter ID: @OpIndia_Revenge.

With this increasing pressure, On Friday 25th, Anonymous held a first full fledged virtual Press conference via an Internet chat in which it criticized Reliance on similar grounds of internet censorship. During the Press conference, Anonymous Operation India members said that they have hacked into Reliance’s Internet filtering server and obtained a list of all government blocked websites, as well sites blocked by Reliance, including links to search results and blogs on Satish Seth, who was an executive in reliance.

As you can see this step by Anonymous was purely regarding their suspension of twitter ID and its revenge. We wonder if they are going out of their way to protest. This might end up sending the wrong message to Government body, and do more harm than good. AnonOps India has also planned a protest for June 9th 2012, asking citizens to protest these blocks by wearing a mask.

In another message they released a press release regarding injustice of Reliance. here’s the quoted message:

“Greetings,
Press, ISP, and the Citizens of India
With this leak we are proving to you something that no one had ever attempted to prove. The Indian government is not only useless when it comes to protecting and serving it’s people but is also equally powerless when it comes to controlling the big guns such as reliance. The following is a list of Sites and URL’s blocked by reliance. Just give it a quick check with list that government has and see how many sites and URL’s are here without the peoples and governments knowledge. Or did the government of yours really know and kept quite due to the special Corrupt special services that they are running for them. Shhhh.. Before you deny It read more.When we first hacked into reliance they realised that we had the list and also cause of the media coverge they knew they were in trouble as they themselves knew that they broke the law and the trust of it’s customers. When they saw media was knowing this they started unblocking the sites to make it look like they are heroes and reliance did you feel it would be so easy for you to do that and not cross us. Bad Idea. You tried to change our passwords and tried everything you know to stop us. For your information We Dont Even Care If You Have A Password. Stop Attacking people and their freedom and we will stopEvery one check this list and see how many sites that has no court order or not even a complaint against them is blocked.
Answer Us:
* Why has Reliance blocked AirIndia employees Protest page on Facebook.(marked in green and purple) —- Did the court issue an order for that too
Or does the government have some ties with reliance to help them kill the strike at AI. Bad Idea.
THINK INDIA THINK ARE YOU GUYS NOT TRUSTING THE WRONG PEOPLE
Time to wake up and get on the streets,
Throw out this corrupt system,
Join us, We have no leaders
We Are Anonymous
We are a Legion
We do not forgive
We do not forget
Expect Us….
You did not, you should have.”